The difference between BGP RD and RT

Let me caveat this post by saying I'm not a Service Provider (SP) kid by trade; I spend my life doing Enterprise, Data Centre and Wireless - so all this MPLSery is new territory for me, and my imaginary sidekick-dog friend ("Hi Jake!") - which means this might be technically incorrect, but this is how the concepts of RD and RT finally "clicked" for me.

How it was explained to me

When I first starting Googling for Dear Life (TM) about this (because I needed to spin up a new VRF/IPVPN/L3VPN on our MPLS Network), and looked at a few existing config excerpts, I thought they were both the same thing, which seems valid:

I didn't really question the fact that the Export/Import Route Target (RT) was the same (and didn't know about "Full Mesh VRF" vs "Hub-and-Spoke VRF"), but it did strike me as odd that the RD wasn't the same as the RT, given all the explanation I'd read said things like:

The RD is used to keep all prefixes in the BGP table unique between Customers or VRFs...

Which I read thinking:

"Hmm, that makes sense; BGP will just append the RD in-front of the Prefix, to identify the VRF it belongs to. But wouldn't that mean the RD should be the same for each PE Router, the same for each instantiation of that VRF/Customer across the network?"

So then why the differing RD from the RTs?

Why bother with the extra admin work of creating a different value each time, between the RD and RT?

How I now understand it 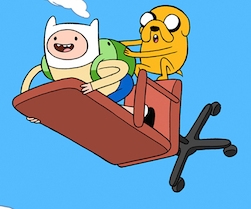 When I started exploring Full Mesh VRF vs Hub-and-Spoke VRF, it started to click into place - the RT and RD aren't really related, and I think there's some missing text from the common definition of how RD's are enacted: - RD = Route(r) Descriptor - RT = Rout(ing Table) Target

When I looked around the configs we had elsewhere, the pattern become clear; it decomposed like this:

Then you step back a bit more, and realise the VRF Name and RT/RD have pretty much no association (and then it suddenly clicks what they mean when they say "Locally Significant"...), and we - as humans - use the same VRF Name everywhere because it's easier for us, like a sort of "Poor Man's DNS for VRF RTs". So there's no reason this config wouldn't just stitch VRF "Bob" to VRF "Jane" between two Routers in the same MPLS Domain - but it'd be a pain in the arse to troubleshoot when it scaled to more than a few Routers:

Great Scott! He's got it!

Which is when it clicks - when you look at two Router's configurations and realise the RT is the same, but the RD changed; within what we've established is the same VRF "Container" (even though we renamed it across Routers, to cause pain to that guy in Ops that looked at our wife wrong during that Christmas Do, yeah - "Bob"...). So roughly then:

Am I right here?

That's how I understand all this MPLS VRFery anyway; if I'm wrong, why not: