SAN to the Future

Storage Area Networking (SAN) is something I'd guess most Network Engineers have heard of, or some limited exposure, but not much; maybe you've done some zoning for the Storage Guys on your Cisco N5K boxes, but otherwise it's a bit of a dark art. Well, same here - but recently I was posed an interesting problem, that in the IP/Ethernet world, is a fairly trivial undertaking:

Can we merge our IBM SAN with our Cisco/Hitachi SAN, so that Servers on one can access Storage on the other, and vice-versa?

Ever the optimist, I immediately responded "Sure, that's like 10 minutes of work or something right?", and so dear reader, we begin.

Optimistic as I am, I've been burned by playing with stuff I dabble in before. So a hasty £4 transaction was made on fleeBay to procure this fine tomb of knowledge from the early 2000's:

I can highly recommend this book. A few bedtime reading sessions later, and I've already learned an awful lot more about Fibre Channel (FC) and undone some misconceptions I'd brought in from the IP/Ethernet world, like:

Applying the theory to reality

Now armed (and definitely dangerous), let's look at what it is we've got in terms of the two SAN Fabrics to merge today, focussing only on the "A Leg" (for visual simplicity, but the same exists again for a "B Leg"): 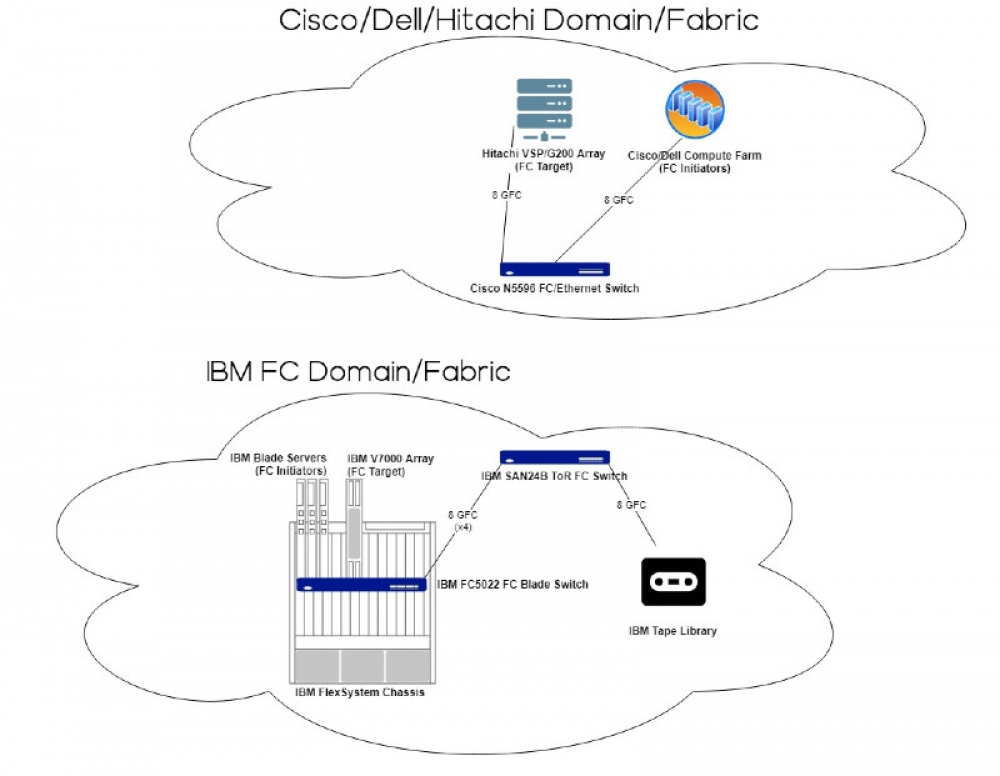 If you're not familiar with an IBM FlexSystem/PureFlex Blade Server, think of a Cisco UCS but with much less functionality. For those of you unfamiliar with the world of the Blade Switch (you lucky, lucky people) - it's a module within the Blade Chassis that takes power/hosting from the Chassis, and has some ports on it as invisible internal ports (i.e. maybe Eth1/1-48 map 1:1 to the respective Backplane NIC on each Server in Blade Chassis Slots 1-8 - so Eth1/3 on Blade Switch #1 is NIC0 on Blade Server #3), and other ports on it as physically-connected uplinks (i.e. maybe Eth1/9-12 are 4x 1 Gbps Uplinks to the Top of Rack Switch, via 1000BaseSX Multimode Fibre patch lead).

Relevant for NPIV/NPV (when we get onto it), the IBM FlexStor V7000 is an in-Blade Chassis Storage Array, which utilises some of the Blade Chassis Server Slots, but acts as an FC Target (Storage) rather than a typical Blade Server Compute Node (as an FC Initiator, Compute Server).

As with many things in Large Enterprises, the cool kid unicorns don't exist here; is it daft that we've got two distinct Data Centre Stacks (one IBM and one Cisco/Hitachi) from each other? Absolutely. Would a cool kid hipster DevOps tell me this is impossible in the real world? Probably. Is there a technical reason for it existing? Not at all. Why is it there? Big Company politics and Project silos.

IBM make this hard to discover, for some reason; I can't think why their Customers have left them in droves since the early 2000's, everyone must be wrong.

Looking at the above, you're probably thinking - "Not too hard then, cable up some OM3/OM4 8 GFC from the IBM SAN24B to the Cisco N5K, job done?". Sadly, no - there's a few pre-requisites we need to do; so I'll leverage the expensive IBM-side and Cisco-side Technical Assistance Centre (TAC) Contracts I've got, and check my back. Caveats I'm aware of are the uniqueness of the FC IDs, so I go around and do the following to glean these:

With Vendor TACs in progress, I go around and complete the above, and am happy that the FCIDs are unique on each FC Switch, so a SAN Merge isn't going to cause a problem. Having read this fantastic blog post on Merging Brocade SAN Fabrics, my understanding is that the SAN Fabric with the highest (in ASCII terms, so "Z" trumps "A" for instance) Effective Configuration name (Brocade speak, or "Zoneset Name" in Cisco speak) wins/goes active. As I want to minimise the outage, and have the Cisco N5K "win" as the FCNS Master, my thinking is:

Response of the Vendor TACs

Cisco are the first to come back; they're not too sure the IBM (Brocade side) will ISL with their N5K kit. Initially, I'm confused - "Surely FC is FC, like Ethernet is Ethernet, if both bits of kit speak FC, even if you've not tested the interoperability, it'll work right?". Sadly, as per the Brocade Community Forums post on "Can I connect a 300e to a Cisco Nexus 5548", the answer is no for me, because:

So back to the drawing board then; but now running with the suggestion someone made in the Forums about Access Gateway (AG) mode.

Access Gateway is Brocade's renaming of what everyone else calls NPort Virtualisation (NPIV) - because, as I'm now finding, FC Vendors are aresholes and don't believe in notions like standardisation or consistent naming. Access Gateway (and NPIV for that matter) basically turns the Brocade Switch (in this case, the FC5022 Blade Switch) into a "dumb FC Hub", which has no configuration/Zoning on it, and consolidates a given number of FPorts into 1x shared NPort, such that the upstream Cisco N5K Switch will see multiple WWNs (Servers) as connected to 1x FPort (rather than the normal 1x F_Port per WWN). It's better described by The SAN Guy on his Configuring a Brocade Switch for Access Gateway (AG) Mode post, but visually it does this: 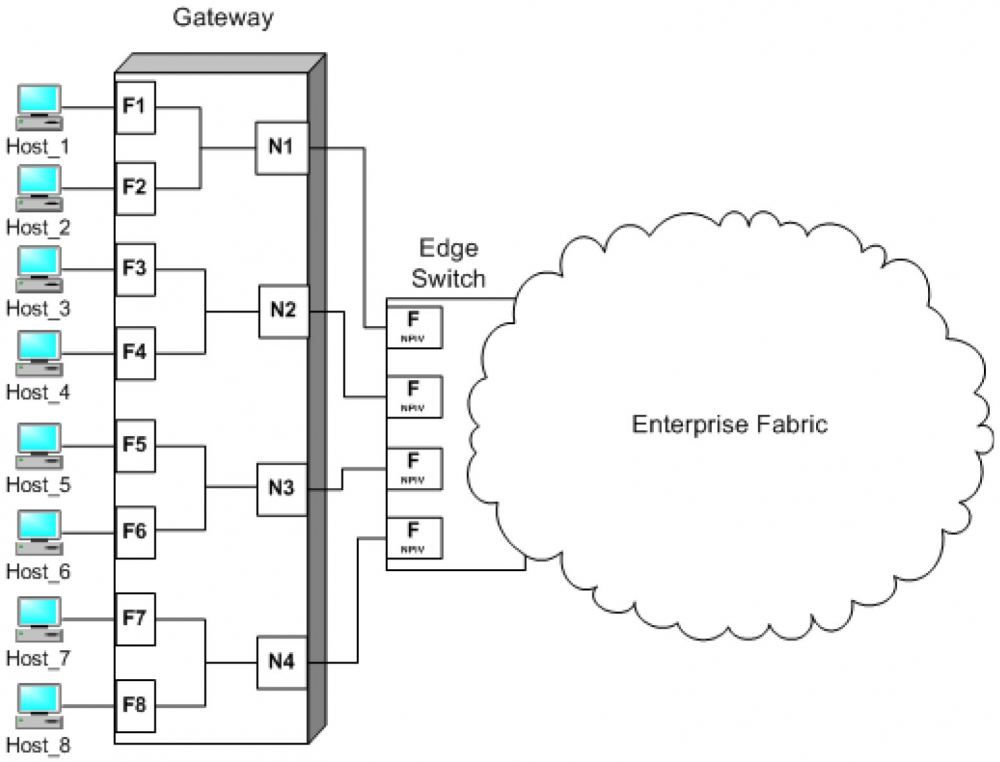 Given that I've got enough spare FC ports on the GEMs on my Cisco N5Ks, this is a perfect opportunity to kill-off the useless IBM SAN24B Top of Rack (ToR) Switches I've got, and just cable the 4x Uplinks from each IBM FC5022 (Brocade 6547) directly into the Cisco N5K, so I end up with this: 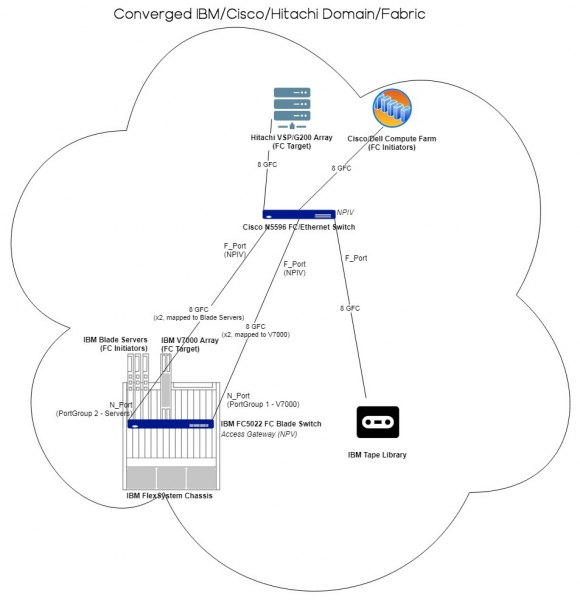 I'll need an outage to achieve this to the Brocade (IBM) side, as after Access Gateway Mode is enabled, the Brocade forgets all it's FCNS/Config, so I'll need to do the following. There is also a very important note in the Brocade Fabric OS Administrator Guide, which basically says FC Initiator and FC Targets can't live on the same NPort; which is something that could happen to me/has significance, as I have an IBM FlexStor V7000 Storage Array on the same Blade Chassis as IBM Flex Compute Nodes (Blade Servers) that want to access it via FC as a LUN. To overcome this, I'll need to ensure the NPort Groupings of my Blade Backplane Ports for a given Blade Compute Node end up on differing N_Ports, or "AG Port Groupings" to those which any given V7000 Arrays end up on.

I've not had chance to navigate the "Politics of ITIL" (TM) yet to tell you if this is the correct way; I'll let you know.