Are you used to Cisco IOS kit and trying to make a GRE Tunnel extend an Overlay VRF (or Routing Instance), using Junos SRX kit, and getting weird errors like this:

Then read on, dear friend - this post's for you.

This is what we're trying to achieve, namely:

This isn't your first GRE rodeo, you've played this game before, and done something similar on Cisco IOS kit, like this:

That worked well for you, so you reckon some config conversion like this might bear some fruit:

That'll do it, right?

What the Juniper SRX errors to fight back

So you try your ping 192.168.99.2 routing-instance Other, it fails miserably; then you go down to checking the Underlay Tunnel Source can ping the Tunnel Destination:

Hmm, that's all fine, Alright, Juniper, what about a little show log messages | last 10 then, eh?

Huh, what's that all about?

Hunting the Interwebs for clues

Time to invoke Dr Google then, and off we find this similarly afflicted person with an SRX1400, with this key scrap of thinking material:

It's not really sinking in, so you re-read it a few times; why does Junos care if my Gr-0/0/0.1 interface is in a different Routing Instance (VRF) to the Underlay, that's the point of the ...tunnel routing-instance destination Other command, right, to tell it to set the destination of the Tunnel Endpoint into another Routing Table, right?

In Juniper land, Destination Sources you!

It's probably best if I show you the fix first, then this might click - here is the fix to suddenly make the Tunnel spring into life:

Note1: You'll need the other IP, for SiteA (10.0.0.7) as this inter-VRF Static Route for the other SiteB Firewall

Note2: You'll need to add that ".inet.0" to your Routing Instance name, because Junos and consistency don't mix.

So if you're like me, you're looking at that bemused, and saying to yourself: "But, but... I set the Tunnel Destination to look in a different VRF, right, otherwise what exactly is the point of that routing-instance destination command all about?".

Well, I'll tell you what I reckon it's to do, I think it's to set the source of the Tunnel (i.e. what Cisco would call the "Tunnel Source") to use the Underlay (Prod VRF) to form; not, as the fecking word in the command reads, the Tunnel Destination. Hence, as there is no command that sets the destination, it assumes the Tunnel Destination is in the same VRF as the Tunnel itself, so you have to set an inter-VRF Static Route to tell it to go into the Underlay to form the GRE Tunnel.

It's the only way I can reconcile it in my head, with you needing to add he destination route/prefix as well as that ...tunnel routing-instance destination... command.

So there you go, in Junos land, this magic badly-named combo does what the sensibly-named tunnel source and tunnel destination combo does in Cisco IOS:

Mind you, in Juniper land opposites are clearly true, so maybe I should call this section the Introduction instead, seeing as it's at the end of the blog post.

If only Juniper sold mineral water, it'd be bottled at destination instead.

I wanted to monitor the quality of the Wireless in my Office to emulate the real-world experience some of our End Users, as I was struggling to correlate what I was seeing on the Wireless LAN Controller (WLC)'s Access Point (AP) monitoring stats to the poor experience being reported. Simplistically, this is taking the magic of a Raspberry Pi, a bit of JSON and a Log Analysis Stack (I chose Splunk, I could have used ELK Stack, or Logz.io or...) that gives you pretty dashboards of the data.

Any values below <like_this> are variables to show an example value, specific to your installation; for instance <vps-server.com> is whatever DNS Domain Name/Dynamic DNS Domain Nam/Public IP Address that your VPS uses.

We'll start with the VPS setup, from a high-level overview; if you're using a Provider like Vultr you should definitely harden your VPS and configure the Firewall/WAF to only allow your WiPi to send HTTP JSON feeds.

I'm focusing on Splunk because that's what I used, but similar steps will exist for ELK or Logz.io. The main advantage of Splunk is that it's free and quick; the Free version does have limitations, however - such as 500 MB Indexed Data and a time-limit on concurrent Search Queries used in your Dashboards, i.e. number of widgets you can use. There's much more that you can do, but I'll get you going with some basics.

You should now be able to login to your Splunk instance at http://<vps-server.com>:8000.

Make sure you can send HTTP to your Splunk instance on Port 8088 (or whatever <HEC Port> you picked otherwise); a quick way of this is using Telnet to see if it connects at all, i.e. telnet <vps-server.com> 8088.

The following script will performa a series of checks (i.e. Ping a host, or TCP-connect to a host); time how long it took and then consolidate the results into a a JSON payload, similar to the below, and finally push this to Splunk via the HTTP Event Collector as frequently as scheduled with your Cron job. It also scrapes information from the WiPi's WLAN interface, such as RTS/CTS issues; signal quality; current bitrate; AP MACs seen and so on.

You can customise the variables towards the top of the script with your values; don't forget to replace <vps-server.com> with your VPS Server's IP Address/DNS Name; <your_location> with a meaningful Location String to you and <your_splunk_api_token> with your Splunk HEC API Token from earlier on.

Adding this to /etc/crontab would cause the script to be run every 5 minutes. Change admin to the Admin User of your Pi (which you should change from pi factory username for security reasons):

This will require you to pip install netifaces dnspython first.

Once done, you'll get JSON payloads being sent into Splunk via the HEC every 5 minutes, and then go start to have lovely visual dashboards like this, showing you the real-world HTTP, DNS, Ping and WLAN stats a real-world User in that Office Location might actually be seeing. 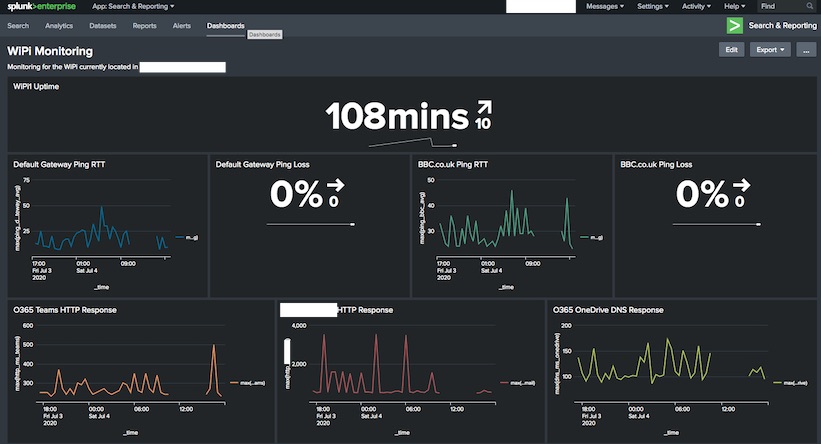 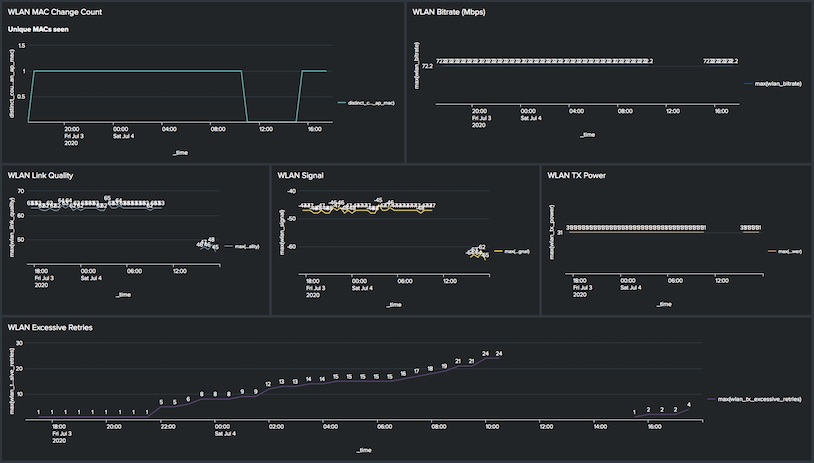 Enjoy finally having a use for that Pi other than taking up space in your drawer :).